Could Anyone Do Luke’s Plank Flip From ‘Return of the Jedi’? 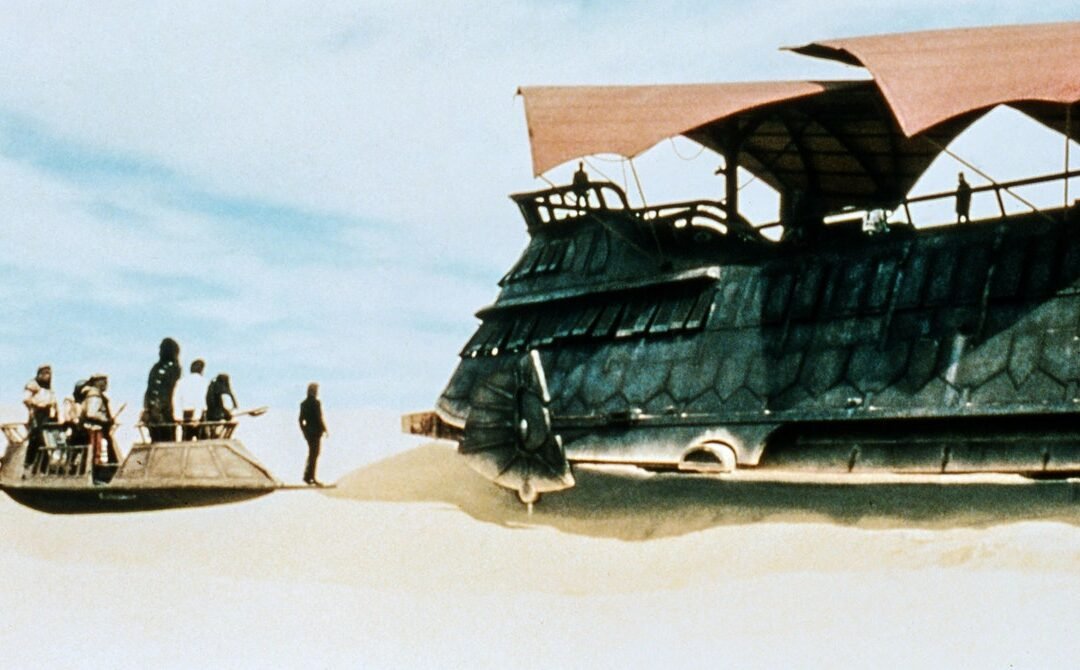 It’s May 4, so happy Star Wars Day—may the fourth be with you!

One of the iconic scenes from Star Wars: Return of the Jedi is the battle on Tatooine at the Sarlacc Pit, the home of a massive creature that just waits to eat the things that fall into its sand hole. (No spoiler alert: It’s been almost 30 years since Return of the Jedi hit the theaters. If you haven’t seen it by now, you probably aren’t going to.)

Luke Skywalker is being held captive by Jabba the Hutt’s guards. They’re on a skiff above the Sarlacc Pit, and Luke is standing on a plank, about to be pushed into the creature’s maw. R2-D2 is some distance away on Jabba’s sail barge—and he has been keeping Luke’s lightsaber. Now for the best part: At just the right moment, R2 launches Luke’s lightsaber so that it flies across the pit for Luke to catch. As that happens, Luke jumps off the plank and spins around. He catches the edge of the plank and uses it to springboard himself into a flip back onto the skiff. Now the battle begins.

I’m going to look at these two motions—the lightsaber toss and the plank flip—and see if it’s possible for an ordinary human to do this, or if you have to be a Jedi like Luke. But I am going to make one big assumption about this scene, and you might not like it. I’m going to assume that the planet Tatooine has the same surface gravity as Earth, so that g = 9.8 newtons per kilogram. This would mean that a jumping human and a thrown lightsaber would follow similar trajectories on both planets.

Oh, I get it: Tatooine is not the same as Earth. However, in the movie it looks a lot like Earth (you know why), and this allows me to make some actual calculations. Let’s do it.

Motion of a Lightsaber

I’m going to start with the lightsaber that R2-D2 launches towards Luke. What can we figure from this part of the action sequence? Well, let’s start with some data.

First I’m going to get the total flight time as the lightsaber moves from R2 to Luke. The simplest way to do this is to use a video analysis program; my favorite is Tracker. With this, I can mark the video frame that shows the weapon leaving R2-D2’s head (which is kind of weird when you think about it) and then mark the frame where it gets to Luke. This gives a flight time of 3.84 seconds.

I’m going to assume that’s not the actual flight time. Why? First, it’s a pretty long time for the lightsaber to be in the air. Also, there’s quite a bit happening during that shot. In the sequence seen in the movie, R2-D2 shoots the saber and we see it rising. Cut to Luke doing a front flip onto the skiff. Cut to Luke landing, then a shot of the lightsaber falling towards him. The final shot shows Luke’s hand catching the weapon. That’s a lot of cuts, and so it might not be a real-time sequence. Don’t worry, that’s fine. That’s what movie directors do.