Down with Dongles! Apple Brings Back the MacBook Ports 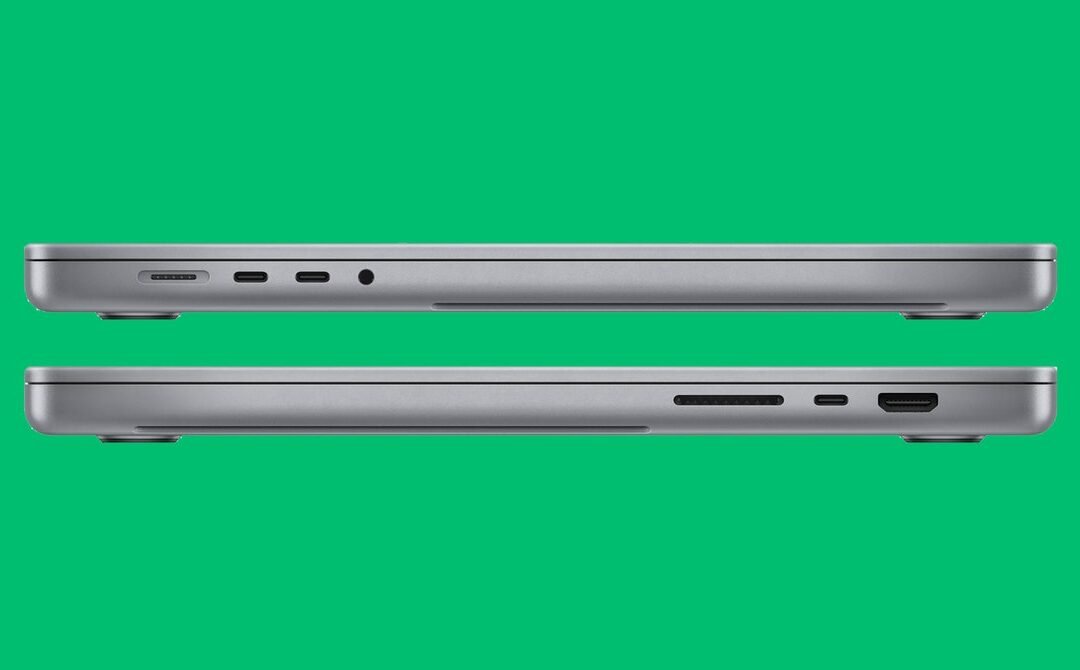 WIRED hasn’t been a magazine about cables for a long time. But even if it were, I’d still have a job. I have a home recording studio and spend my days testing TVs, soundbars, and other audiovisual equipment for our Gear section. There’s so much copper cabling in my garage, the French government could smelt me a statue of Steve Jobs to erect in San Francisco Bay.

From 2005 to 2015, you could buy an Apple laptop with a glorious assortment of ports to fit all these cables: HDMI, an SD card slot, standard USB ports, a Thunderbolt DisplayPort. If you could name it, you could probably plug it into your MacBook without an adapter. I could take my little Apple laptop anywhere (originally a 2008 model, now a still-humming 2013). I didn’t have to mess with wireless protocols or make sure I had an adapter that actually worked.

Since 2016, I’ve looked on in frustration as MacBooks got thinner, faster, and better-looking, while slowly shedding everything except a few USB-C ports. Their usefulness diminished with every port that disappeared—a fact that the notoriously meticulous Mr. Jobs might have noticed.

During a global pandemic that saw millions leaving their offices to work from home, the portless problem became more pronounced than ever. I couldn’t quickly snag video off my camera’s SD card and hook up my audio interface. Others—including my own frustrated coworkers—had more basic issues, like how to plug in a keyboard, screen, and mouse. If an extra monitor isn’t working, is the problem the monitor, the cable, or the dongle? How come you can’t even charge your computer with a mic plugged in?

I’m overjoyed to hear that Apple’s latest MacBook finally adds back ports. For the first time in a long time, I may be among the early buyers.

Apple is known for shaping the future, but its visionaries sometimes leapfrog right over the present. When it boldly removed the headphone jack from the iPhone, there weren’t a ton of great wireless headphones. That bet paid off. The market adjusted, and Apple invented the most popular pair of wireless headphones in history. Barring a few audiophile models, wireless headphones are now the only headphones worth buying.

But displays, cameras, audio interfaces, keyboards, and mice aren’t all wireless, and they haven’t become wireless simply to placate Apple’s hate for cables. The same also can’t be said for other accessories, like SD cards. Apple should not expect every industry to abandon universal standards because ports are unsightly.

In its attempt to thin out and declutter MacBooks, Apple manifested a terrible, annoying world in which everyone spends hundreds of dollars on multiple USB-C-to-whatever dongles and troubleshoots problems between the Mac, the cable, the dongle, or some combo of the three. The setup even makes tech-savvy people look stupid. Many of my friends own nicer, newer Macs, but my 2013 model is the only one that can plug straight into a TV’s HDMI port to stream Formula 1.

Apple’s designers have clearly listened to the cries of the weary masses. Today’s announcement brought a whole series of welcome redevelopments. Apple ditched the cumbersome Touch Bar and introduced a whole new series of ports for more connectivity than ever, all without an adapter.

The most amazing development is that you can now plug up to four displays into the MacBook—and charge it at the same time. It has one HDMI port for displays and three Thunderbolt 4 ports in total. It has an SD card slot. Adding a better headphone jack that works with high impedance headphones means that music producers can plug in more power-hungry models without adding a headphone amp. MagSafe charging is back.

It all feels like a return to a MacBook that people can actually use, rather than look good in your hand or in an ad.

Apple should continue to push boundaries, but it should recognize when it has reached them. Function should not be overshadowed by form. By adding back ports that we can all actually use, the Cupertino giant is admitting what we already knew: The customer is sometimes right.