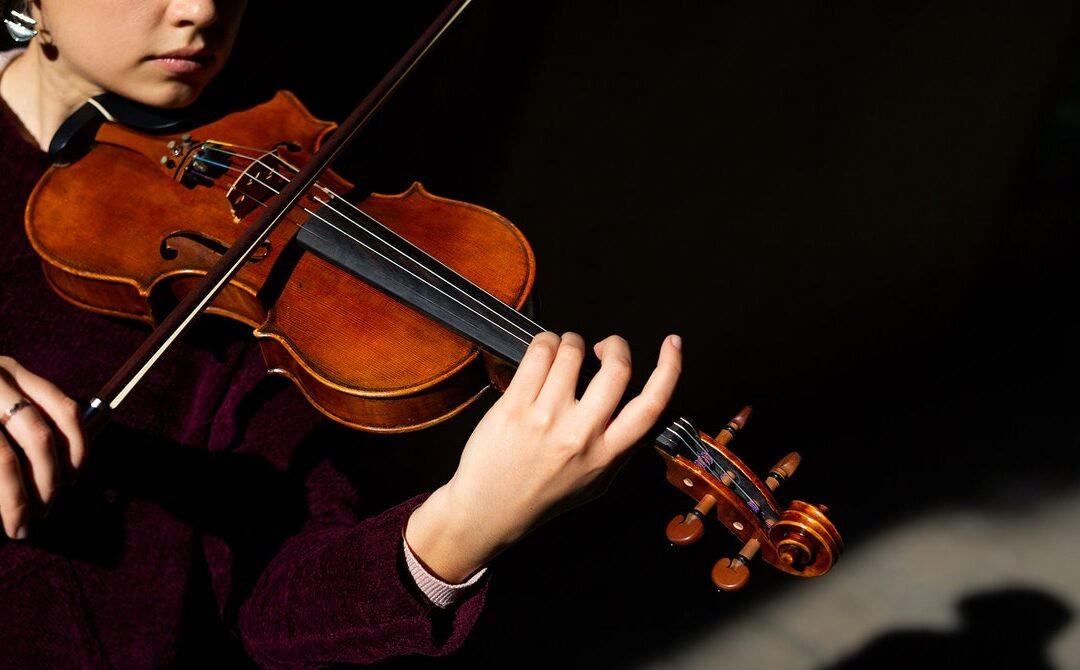 I first held a violin in my late forties. Placing it under my chin, I let go an impious expletive, astonished by the instrument’s connection to mammalian evolution. In my ignorance, I had not realized that violinists not only tuck instruments against their necks, but they also gently press them against their lower jawbones. Twenty‑five years of teaching biology primed me, or perhaps produced a strange bias in me, to experience holding the instrument as a zoological wonder. Under the jaw, only skin covers the bone. The fleshiness of our cheeks and the chewing muscle of the jaw start higher, leaving the bottom edge open. Sound flows through air, of course, but waves also stream from the violin’s body, through the chin rest, directly to the jawbone and thence into our skull and inner ears.

Music from an instrument pressed into our jaw: These sounds take us directly back to the dawn of mammalian hearing and beyond. Violinists and violists transport their bodies—and listeners along with them—into the deep past of our identity as mammals, an atavistic recapitulation of evolution.

The first vertebrate animals to crawl onto land were relatives of the modern lungfish. Over 30 million years, starting 375 million years ago, these animals turned fleshy fins into limbs with digits and air‑sucking bladders into lungs. In water, the inner ear and the lateral line system on fish’s skin detected pressure waves and the motion of water molecules. But on land the lateral line system was useless. Sound waves in air bounced off the solid bodies of animals, instead of flowing into them as they did underwater.

In water, these animals were immersed in sound. On land, they were mostly deaf. Mostly deaf, but not totally. The first land vertebrates inherited from their fishy forebears inner ears, fluid‑filled sacs or tubes filled with sensitive hair cells for balance and hearing. Unlike the elongate, coiled tubes in our inner ears, these early versions were stubby and populated only with cells sensitive to low‑frequency sounds. Loud sounds in air—the growl of thunder or crash of a falling tree—would have been powerful enough to penetrate the skull and stimulate the inner ear. Quieter sounds—footfalls, wind‑stirred tree movements, the motions of companions—arrived not in air, but up from the ground, through bone. The jaws and finlike legs of these first terrestrial vertebrates served as bony pathways from the outside world to the inner ear.

One bone became particularly useful as a hearing device, the hyomandibular bone, a strut that, in fish, controls the gills and gill flaps. In the first land vertebrates, the bone jutted downward, toward the ground, and ran upward deep into the head, connecting to the bony capsule around the ear. Over time, freed from its role as a regulator of gills, the hyomandibula took on a new role as a conduit for sound, evolving into the stapes, the middle ear bone now found in all land vertebrates (save for a few frogs that secondarily lost the stapes). At first, the stapes was a stout shaft, both conveying groundborne vibrations to the ear and strengthening the skull. Later, it connected to the newly evolved eardrum and became a slender rod. We now hear, in part, with the help of a repurposed fish gill bone.

After the evolution of the stapes, innovations in hearing unfolded independently in multiple vertebrate groups, each taking its own path, but all using some form of eardrum and middle ear bones to transmit sounds in air to the fluid‑filled inner ear. The amphibians, turtles, lizards, and birds each came up with their own arrangements, all using the stapes as a single middle ear bone. Mammals took a more elaborate route. Two bones from the lower jaw migrated to the middle ear and joined the stapes, forming a chain of three bones. This triplet of middle ear bones gives mammals sensitive hearing compared with many other land vertebrates, especially in the high frequencies. For early mammals, palm‑sized creatures living 200 million to 100 million years ago, a sensitivity to high‑pitched sounds would have revealed the presence of singing crickets and the rustles of other small prey, giving them an advantage in the search for food. But before this, in the 150 million years between their emergence onto land and their evolution of the mammalian middle ear, our ancestors remained deaf to the sounds of insects and other high frequencies, just as we, today, cannot hear the calls and songs of “ultrasonic” bats, mice, and singing insects.