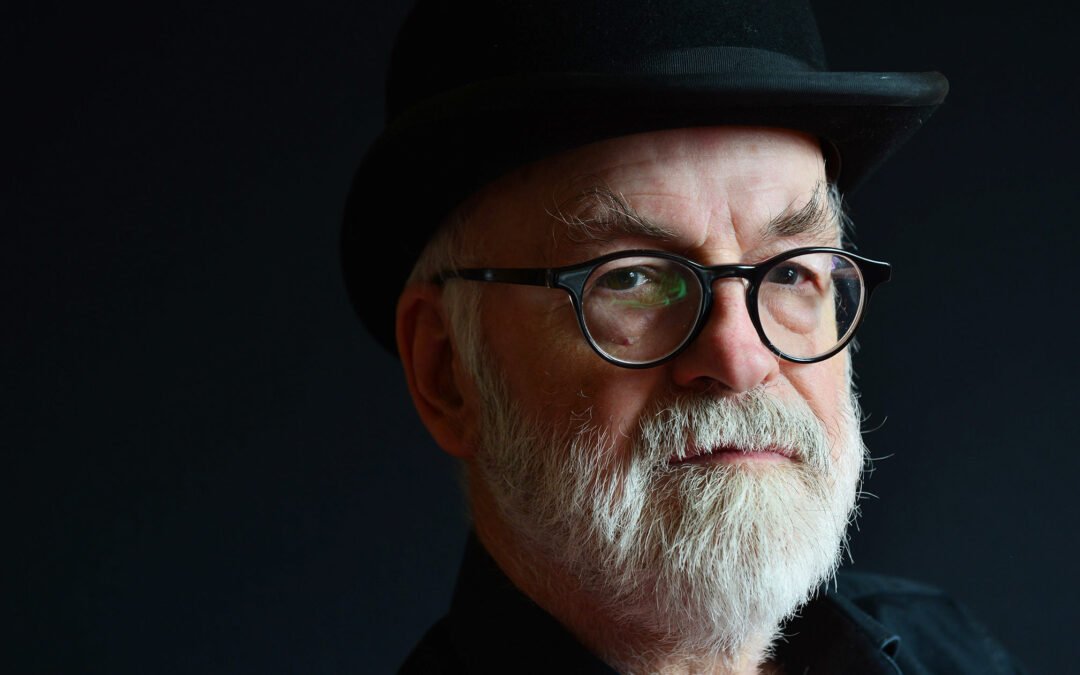 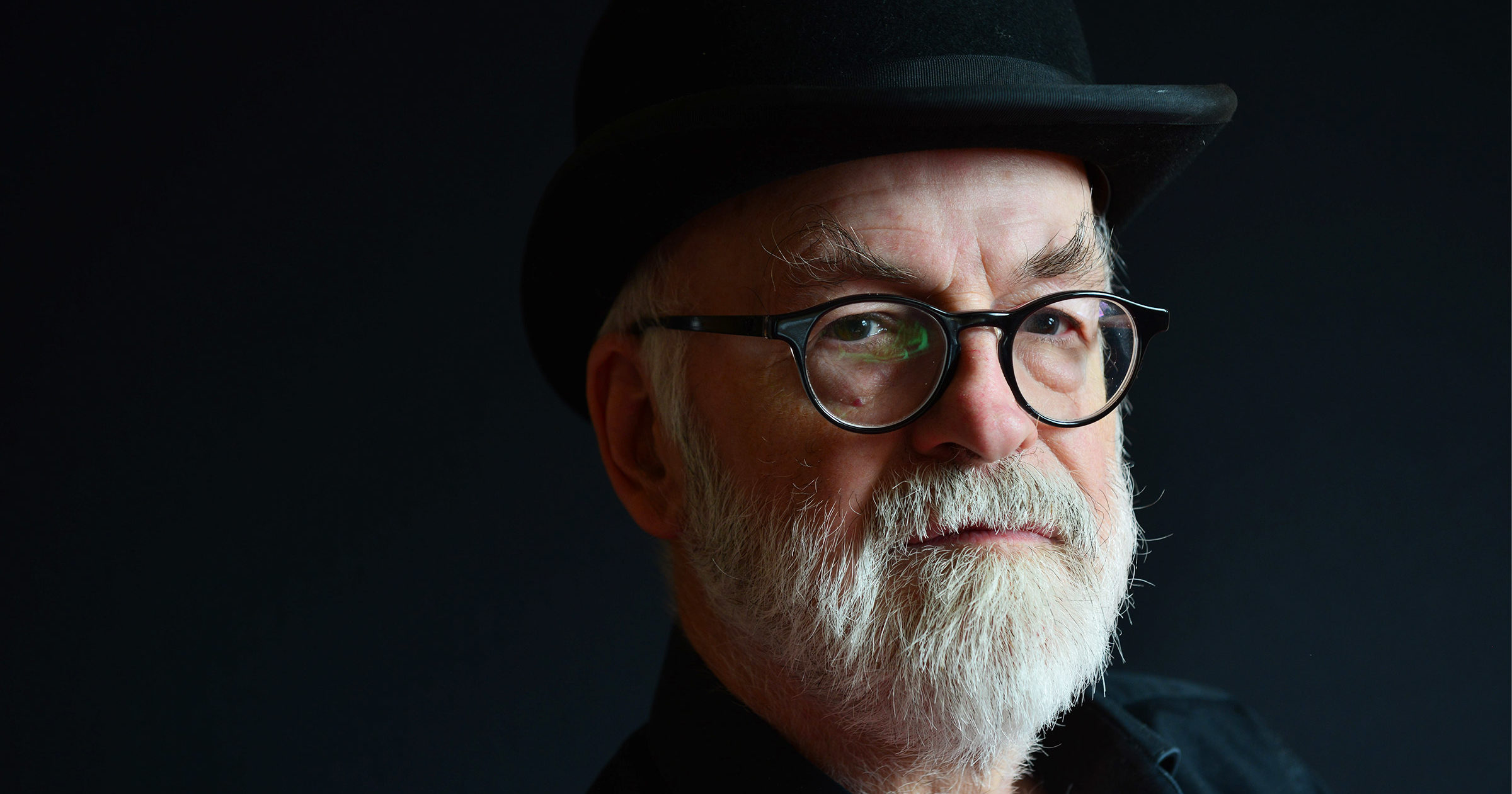 Terry Pratchett was the author of more than 50 novels, many of them set in the fantastic land of Discworld. Writer and comedian Marc Burrows explores the author’s life in his recent book The Magic of Terry Pratchett, the first full-length Pratchett biography.

“He’s got a fascinating story,” Burrows says in Episode 501 of the Geek’s Guide to the Galaxy podcast. “It begins and ends in really, really interesting ways, and in the middle he’s briefly the biggest-selling author in [Britain]. So that’s a good story that no one has told before.”

Pratchett rose to popularity in the mid-1980s with humorous, pun-filled novels such as The Colour of Magic. The decade was a high point for the “funny fantasy” movement, in which authors like Pratchett, Robert Asprin, and Craig Shaw Gardner poked fun at the fantasy genre’s many absurdities. “The reason Pratchett took off is because fantasy was popular, and he had the idea of doing for fantasy what Douglas Adams did for sci-fi,” Burrows says. “That’s the elevator pitch for the first Discworld novel.”

But as the Discworld series developed, Pratchett’s approach became more and more thoughtful. Over dozens of books he used fantasy and young adult literature as a playground to explore a wide range of serious topics such as discrimination, authoritarianism, and mortality. Readers took notice. By the end of his life Pratchett had achieved bestseller status, inspired a devoted fan following, and been knighted by Queen Elizabeth II.

“He started to get the big awards and the critical acclaim,” Burrows says. “Which I think he was very, very pleased about on the one hand, but on the other hand he always defended himself as a genre writer, and always felt that rather than saying he was more than a fantasy writer—more than a comic fantasy writer or a sci-fi writer—it was the genre of fantasy and science fiction itself that was worthy of praise.”

A second Terry Pratchett biography, Terry Pratchett: A Life with Footnotes, will be released later this year, written by Pratchett’s longtime friend and assistant Rob Wilkins. Burrows is looking forward to seeing what insights the new volume brings. “I like the idea that the two books will actually complement each other, and that mine will be a really nice appendix to the official story,” he says. “So I’m hoping that rather than disproving or making mine redundant, they’ll actually work together.”

Listen to the complete interview with Marc Burrows in Episode 501 of Geek’s Guide to the Galaxy (above). And check out some highlights from the discussion below.

Pratchett was a storyteller at heart. That was his gift. He was an amazing storyteller, and he could never resist the urge to give his own anecdotes a polish. It made him a very entertaining interview—he prepared for interviews rigorously. He’s really quotable in interviews, because before he started the press for a new book, he would prepare lines that he knew would be great pull quotes. He’d been a journalist, so he knew exactly what to say. But yeah, he would always give his stories a bit of polish … He just had a knack for knowing how to tell a story, and why not apply that to your own life? No one’s checking until after you’re dead and some chump comes along and writes a book about you.

The German publisher butchered Pratchett’s work. The stuff in the mid-’80s and ’90s, it’s genuinely funny. They didn’t like the cover to Mort—the fourth Discworld novel—for some reason, so instead they used the cover for the next book in the series, Wyrd Sisters. … Mort is a book about Death’s apprentice, and Wyrd Sisters is a Shakespeare parody about witches. There are basically no witches in Mort—there’s a witch, briefly. It’s clearly the cover of a completely different book. Then of course they’ve got to publish the next book, which is Wyrd Sisters, and they need a new cover for that, so they just use it again. So there’s two Discworld novels in the ’90s German production that have exactly the same cover.

Terry Pratchett never wanted to be ‘cool.’ He actually thrived and relished not being cool. That wasn’t who he was. He liked to play the outsider, he liked to play the nerd. He liked the fact that he was his audience. He was writing for himself … He knew that his books were read by a mainstream crowd—you can’t be that successful and only have an audience of nerds. But he also knew that the core audience, the ones that drove the fandom—and the fandom is what powered the success—he knew that they were him. They were exactly the kind of person he had been in the ’60s when he was going to conventions and getting nervous about meeting Arthur C. Clarke in the toilet, and writing letters to sci-fi authors. He was that person.

My publishers are great, but they’re not a huge name, so I kind of realized that I knew how to sell this book probably better than anybody else would, in that I knew Discworld fandom. … I ended up doing 500 pre-sales just from me—not from Amazon or bookshops or direct from my publisher or anything like that, just through me—which was brilliant, but I hadn’t quite anticipated what having 500 copies of a book in your house would be like. They turned up in a truck, and the truck driver seemed very confused that he was delivering to what turned out to be a residential apartment in northeast London and not a warehouse. So yeah, for a while we lived amongst cardboard, and getting them all mailed out was an industrial operation.