The Supreme Court Is Building Its Own Surveillance State 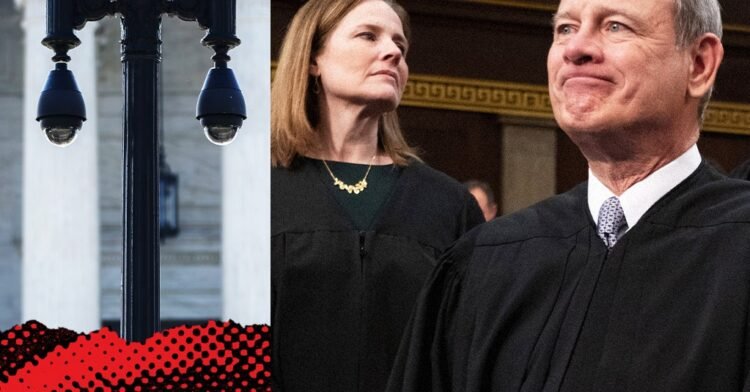 Following the leak of a draft opinion striking down abortion rights, the Supreme Court’s police force (the Marshal’s Office) launched an unprecedented probe to uncover who leaked the decision. Already, authorities have demanded phone records, signed affidavits, and law clerks’ devices. The scrutiny is so intense that many onlookers have suggested that clerks retain attorneys to protect their rights. While it’s unclear how broad the cellphone searches are, or the exact language of clerks’ affidavits, the intrusive probe reveals a disturbing about-face from the Supreme Court, and particularly Chief Justice John Roberts, on surveillance powers.

While the Roberts Court was never at the vanguard of protecting digital rights, for years it did far better than many expected. In 2014, its landmark Riley v. California decision protected cellphones from warrantless searches. Just four years later, the court ruled in Carpenter v. United States that police violated the Fourth Amendment when they used cellphone location data to track devices for more than a week without a warrant. The same court, under the same chief justice, is now weaponizing all the search tools it once questioned.

The searches are invasive—but apparently lawful. Clerks have been asked to turn over devices, but the phones haven’t been seized. And the affidavits are reportedly voluntary. But the reality is that clerks’ consent is coerced, prompted by the fear that they’ll be wrongly suspected of leaking the draft if they invoke their rights. Even worse, the justices are making decisions about how to conduct the investigation from a place of personal anger. Justice Thomas compared the leak of the Dobbs v. Jackson’s Women’s Health draft decision to marital infidelity. For Chief Justice Roberts, the leak was a “betrayal” aimed at undermining the court. In weighing the legality and propriety of this electronic witch hunt, none of the justices remain impartial. If the searches were a case before the court, they’d be forced to recuse themselves. But since it’s merely an internal investigation, normal judicial ethics don’t apply.

At a minimum, the Supreme Court’s reactionary move reads like hypocrisy, but the implications for future surveillance cases could go much further. This experience is likely to radiate out to countless cases that do come before the court—ones about police using the same search tactics that terrify clerks right now. Lower courts and states are currently evaluating the constitutionality of everything from geofence warrants (which track every person in a specified area) to warrantless device searches at the border. The justices might claim they hold no conflict of interest in those future cases, but their mindset will be forever changed by this boondoggle.

The next time the court hears a challenge to the government’s power to track and surveil, the justices may only think of their own power to do the same.

For a chief justice like Roberts, who’s obsessed with maintaining the legitimacy of his institution, the dragnet will prove a self-inflicted wound. Yes, the leak may have eroded trust, but the investigation will likely cause even more lasting damage. Worse yet, it is consistent with a damming theme for the court, an institution willing to (occasionally) uphold rights on paper while violating them in practice. It’s the same court that writes lengthy oratory extolling the grandeur of free speech and assembly while fencing off its entire plaza from public demonstration.

The Supreme Court is now its own worst enemy. Courts’ openness and justice grant them power, not marshals and fencing. The threat to the court’s legitimacy comes from its politicized reasoning and the violation of its own rules (like stare decisis, the principle of letting established law stand) in Dobbs and other recent cases, not a leak. When the court casts aside its own restraints, turning extremism into law and its chambers into a police state, it reduces what was once deemed a “temple of justice” into a petty office Americans increasingly hold in contempt. And the court’s surveillance and investigations will only alienate clerks and turn an open judiciary into a closed-off surveillance state.

This bunker mindset is not compatible with the values of an open court or an open society. The next time the court hears a challenge to the government’s power to track and surveil, the justices may only think of their own power to do the same. The most frustrating part is that the justices know better. In public statements, they wax poetic about the importance of nonpartisanship, openness, fairness, and commitment (above all) to the rule of law. But in this moment of institutional panic, they are casting aside all the lessons of American judicial history, clinging desperately to control, and sabotaging their own institution in the process.