Which Crops Can Survive Drought? Nanosensors May Offer Clues 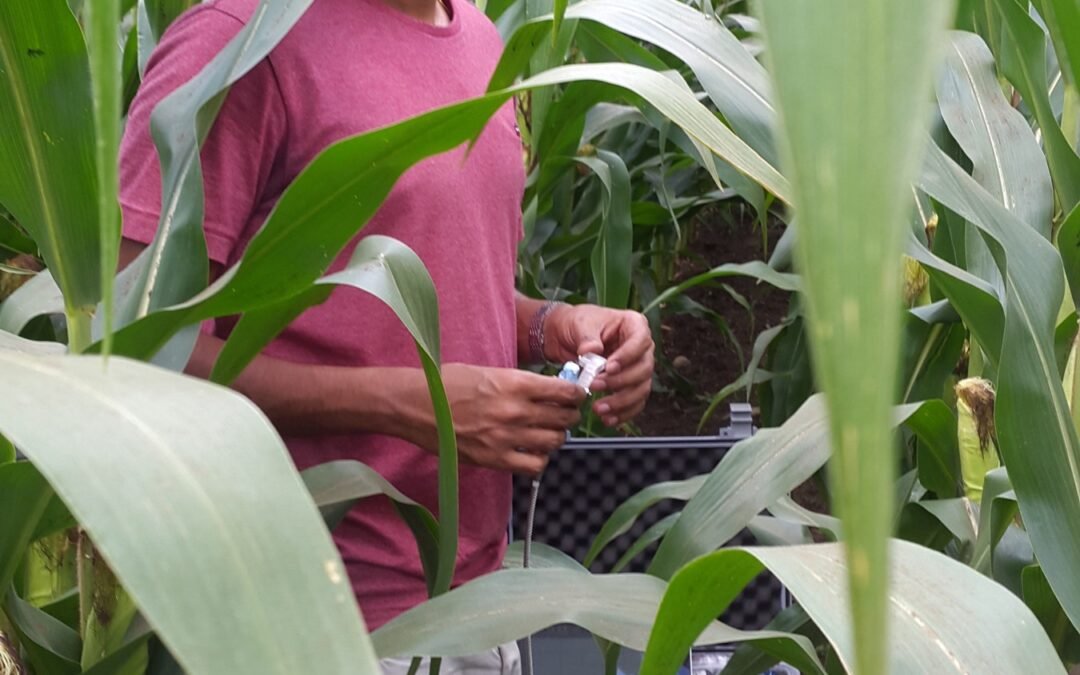 For the current study, the researchers injected the solution into maize leaves, which they chose, in part, because the crop is critical to worldwide food supply. The nanosensors coated the outside of the leaf’s cells, swelling or shrinking based on how much water was available.

The dye molecules in AquaDust fluoresce at different wavelengths, depending on their proximity to each other, and these wavelengths can be measured with an instrument called a spectrometer. When water is readily available, the nanoparticles swell, pushing the dyes apart and creating a peak in the green wavelength the dyes emit. When there’s not much water, the nanoparticles shrink, and the dyes move closer together, resulting in a peak in the yellow wavelength. Then the researchers can convert the emission spectrum readings into water potential measurements, all without harming the plant.

The technique can be applied to different locations along the leaf to track water flow, says Piyush Jain, a study coauthor and mechanical engineering PhD candidate at Cornell. “What that allows us to do is basically model the water flow through different tissues, starting from the stem to different parts of the leaf,” he says.

The researchers focused their AquaDust measurements on the area just beneath the leaf’s surface, where plants carry out important functions like taking in CO2, releasing water vapor into the atmosphere, and packaging sugars created by photosynthesis. To breed crops that manage water better, having a better grasp of the biology and behavior of water at such critical points will be very helpful, the researchers say.

Ultimately, the technology might be used in real-world situations, like for workers in fields or greenhouses. It might even be possible to someday spray AquaDust over a field and then use a multispectral camera to quickly measure water potential across hundreds of plants.

And while that’s still a far-off development, AquaDust sounds like useful technology, says Irwin Goldman, professor of horticulture at the University of Wisconsin, Madison, who wasn’t involved in the study. “Using any sort of remote sensing technology—in this case they’re using nanosensors—is an enormous leap forward,” he says. “My sense of this technology is that it is the future, really.”

Breeders have focused on developing drought-resistant crops for some time, says Goldman. “For at least the last 15 years, there’s been a sense in the plant-breeding community that we need to be incorporating selection for greater resilience in our crops as part of our breeding programs, that it’s not enough to just breed higher-yielding or better quality, or for disease resistance,” he says. But, he points out, it will be a long process to identify which plants best defy water loss and which genes are linked to that resiliency, before then pairing them with other desirable traits like good nutrition and flavor. “Once we identify the genes, that’s very helpful, but it doesn’t necessarily get us all the way to the end of the project,” he says. “We still have to find useful combinations.”

For now, AquaDust is primarily a research tool, not something that’s ready to be rolled out at scale that farmers or breeders could use to, say, assess 1,000 plants in an hour. For one thing, the injected solution itself contains water, which must evaporate before anyone can take a measurement. “We wait for about a day to get the leaf to come back into its natural state,” says Jain.

AquaDust’s application and readout methods would need to be refined before it could be ready for such high-throughput measurements or commercial products. But in the meantime, being able to precisely target the flow of water within plants might help researchers solve some mysteries. One of them, says Stroock, is whether plants ever allow the innermost layers of their leaves, called mesophyll, to dry out. For years, the conventional wisdom was that they avoid it, but indirect measurements by other labs now suggest that it’s a possibility. Being able to test this directly with AquaDust could fundamentally alter our understanding of how plants manage their water and how they handle the stress caused by dry inner tissue, he says.

“We believe there are very exciting questions to answer in the lab that take precedence over commercialization,” Stroock says. “Right now, Iowa farmers are not calling us to say, ‘Can we cover our field with AquaDust?’”

Those farmers are probably just hoping for rain. But, someday, technology like nanosensors might help them out when those hopes run dry.